Get a Free Issue
Subscriber Log In
Subscription Renewal

Newsademic is an international newspaper that is published every second week (26 issues per year). Articles are written and edited in an uncomplicated and easy-to-understand style. Used by teachers, schools, language schools, English language tutors, families, homeschoolers, individual students, and public libraries in over 100 countries, it is accompanied by two sets of worksheets or activities, plus the answer keys and a two-year searchable archive.

Newsademic is published in both PDF and HTML formats. Each is available in both 'British English' and 'American English'. Featured articles are the same, but some vocabulary, spelling and punctuation differ.

Each issue features up to 20 world news stories that have made headlines during the previous two weeks. Articles are a mix of current affairs, scientific discoveries, cultural heritage, history, politics, and the business world. Where appropriate, they include historical information, context and background that is normally lacking in daily mainstream media.

Articles reflect no political or religious bias. News stories are reported factually and every attempt is made to explain all sides where opinions differ.

Newsademic carries no advertising. Nor does the publication include articles about television, sport, computer games, pop music, or the celebrity culture.

All subscribers have mouse-over definitions of more complex words on the HTML versions. Each issue also includes crossword and wordsearch puzzles that are based on these glossary words. Articles can be printed out separately either with, or without, a list of the highlighted glossary words. 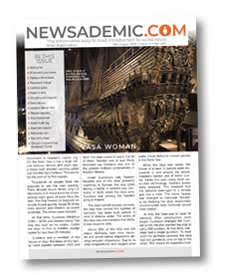 A variety of cover stories from recent issues of Newsademic...

50 years since Apollo 11 made the first moon landing

Hagia Sophia reverts from
a museum to a mosque

Covid-19: a worker spraying disinfectant in a city in India

Gandhi’s glasses are
sold at auction